If you’ve been following me for any amount of time, you know I’ve been, and still am, very much against the MANY deceptive and damaging cellulite treatments, fat-reduction procedures and body-sculpting services that prey on the desperation of women, and yes – even men…

Today is another perfect, although very unfortunate, example why I am so against them…


Down below are Linda’s exact words, posted by her, on her instagram (feel free to go visit her via the instagram link below, give her your support and let her know Joey Atlas can help her, seriously.)

According to her instagram post, Evangelista developed a side effect of CoolSculpting called paradoxical adipose hyperplasia (PAH), which means that new fat cells were created to replace the frozen ones.

Let’s read that again; “…new fat cells were created to replace the frozen ones.” (think about that!!)

She wrote that even after “two painful, unsuccessful, corrective surgeries” she is “permanently deformed” by the resulting condition.

While a 2014 study placed the incidence of paradoxical adipose hyperplasia/PAH as a side effect of fat-freezing procedures at an extremely low (0.0051 percent), more recent evaluations have placed it higher, between 0.05 and 0.39 percent. (I would even say it’s probably higher than that.)

According to Linda’s post, she was not made aware of the risk of paradoxical adipose hyperplasia/PAH before the CoolSculpting procedure.

And she’s not the only one….

There are many more people out there who’ve been damaged by CoolSculpting and similar procedures under other names and brands.

For example if you search; “class action lawsuit against CoolSculpting”

And heres a news video with some more info:

And while you’re here, feel free to check out any of the recent podcast episodes you may have missed:

Here’s the link to Carol’s Big Cellulite Success Story: Before & After Her Cellulite Removal 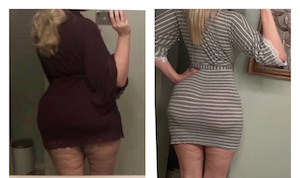